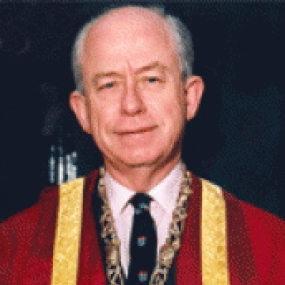 Alastair's Presidency from 1991-1993 spanned a crucial period in the history of the newly formed College. Taking over from Michael Rosen was no easy task in itself, but it had become clear that the initial concept of a college within the RCS was not going to work. Alastair had therefore to shoulder the responsibility of  overseeing the conversion of the newly found premises in Russell Square and then moving into them. The College owes him a great debt of gratitude for the immense amount of work he did over that period, including playing a major part in negotiating the separation from the RCS, which was not without its difficulties. It is largely thanks to him that so much of our memorabilia was safely transferred to the new College.

Having moved into Russell Square he had to begin the delicate planning for Her Majesty's visit to present our Royal Charter in 1992, at a time when we already had the Princess Royal as our Royal Patron.  Alastair's diplomacy, together with his wise choice of the former clerk to the Privy Council, Sir Geoffrey de Deney, as our first CEO, ensured that protocols were observed and that the opening ceremony will always be remembered by those present as a memorable and moving occasion. The fact that our Articles and Ordinances have remained as far as I know virtually unchanged for over 20 years is also a tribute to the work he and Sir Geoffrey did in those momentous days.