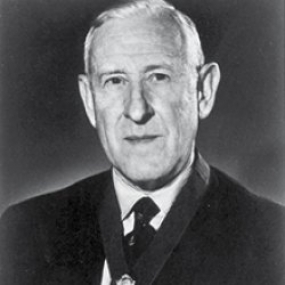 After qualifying Vernon Hall began his career as a part time casualty officer before taking up house surgical posts at King’s College Hospital and the Eye Hospital. He then took up the offer of a Junior House Anaesthetist post at King’s, progressing to Senior House Anaesthetist after 3 years. He was appointed to a consultant post within the same hospital in 1930, and to two sessions a week at Southend General Hospital several years later. Like many anaesthetists at this time he also did general practice locum work to increase his income. At the outbreak of WW2 he joined the Emergency Health Service and was sent initially to Horton Hospital before being recalled to King’s at the start of the Blitz. He then joined the RAMC and, after a brief period in Chester, was posted to Ceylon. At the end of the European war King’s successfully asked for a “B” release so he returned to to the hospital for the rest of his clinical career and retired in 1969.

Throughout his career Vernon Hall dedicated himself to medical teaching. His appointment to the British Military Hospital in Colombo, Ceylon was to establish anaesthetic training to provide anaesthetists for India and Burma. At one point he was posted to a tented hospital in the jungle to train, mainly American, soldiers for an invasion into Burma that never took place. He was appointed Advisor in Anaesthetics to the Eastern Command, this being extended to include Burma and South East Asia, and he finally rose to the rank of Brigadier in full charge of anaesthesia in India and the Eastern Sector. On return to King’s he was appointed Vice-Dean of the Hospital Medical School and then Dean from 1951 – 1967. At the start of the NHS he was directly involved with the complex administrative separation of Kings College Hospital Medical School from Kings College Hospital and subsequent negotiation for “teaching beds”. He became a member of the University Faculty of Medicine and Chairman of the University Board of Advanced Medical Studies. In 1948 he was a foundation member of the Board of the Faculty of Anaesthetists, and was part of the team looking after Princess Elizabeth during the birth of her first child at Buckingham Palace. He was also involved in her subsequent confinements and was awarded a CVO for his services. He became President of the AAGBI in 1965.

Vernon Hall married Marcia Cavell, also an anaesthetist, in 1935 and they had three children, a boy and two girls. Vernon was a very keen sportsman, enjoying football, cricket, tennis and squash. He took up rugby whilst a medical student and played for the medical school first team. He and his wife shared a love of horses and even during his early career in London they would ride regularly in Epping Forest. They retired to Exmoor to pursue this interest, although by this time Vernon was happier walking. Later they returned to Beckenham to be close to their family.

Sources and any other comments: Vernon Hall’s unpublished autobiography held at the Wellcome Library; Medical Directory; 1911 Census and vital records at www.ancestry.co.uk. Photo from College collection.