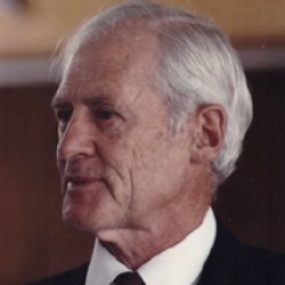 Early appointments were as RMO Alfred Hospital, Melbourne (1950), senior RMO Benalla Hospital, Victoria (1951) and anaesthetic registrar, Royal Women’s Hospital, Melbourne (1952). During 1953 he was research fellow in pharmacology, Melbourne University & anaesthetic registrar at the Royal Melbourne Hospital, subsequently travelling to the UK. He obtained the fellowship in quick time and was appointed lecturer in physiology at the RCSEng at the end of 1954, returning to Melbourne in 1956 as acting director of anaesthesia, Royal Women’s Hospital. Two overlapping academic posts followed: perfusionist, cardiac bypass research unit, Royal Melbourne Hospital (1957-63); and research anaesthetist, hyperbaric unit, Peter MacCallum Clinic, Cancer Institute (1959-73). In 1958 he began his long association with the Royal Children’s Hospital, first as anaesthetist, then being deputy director of the department (1975-87) and becoming honorary consulting anaesthetist on retirement in 1988. In parallel he had continued his connection with the Cancer Institute, and, from 1964, the Royal Melbourne Hospital. In addition, between 1972 and 1990 he was a reseach associate in the Department of Electrical and Computer Engineering Science at Monash University.

The pharmacology of anaesthesia was an early and continuing interest, expressed through research, teaching (at home & abroad) and publication. His book for fellowship candidates ran to four editions (the last co-authored with his daughter, Lindy) and involvement in one of the earliest attempts at computer controlled drug administration were both important contributions. He also published on hyperbaric medicine, radiotherapy & C-P bypass, and served on the Board of Anaesthesia & Intensive Care for 44 years. The ‘Rank’ visiting lecturer to the UK Faculty in 1982, he was also a member of both the Blood Transfusion Advisory Committee of the Australian Red Cross (1981-94) and the Victorian Consultative Council on Anaesthetic Morbidity & Mortality (1984-94).
He contributed to, and was honoured by, many organisations, notably: Australasian Faculty (examiner, supervisor of primary courses 1964-93, board member, Dean 1968-70, Robert Orton Medal 1989); ASA (chair Victorian section, Ben Barry Medal 2000, Gilbert Brown Medal 2016); Royal Melbourne Children’s Hospital (President’s Medal 1985); Medical Defence Association of Victoria (Gold Medal 2002), and Malaysia’s Abdul Majid Ismail Medal (1978). An enthusiast for the history of medicine, he worked with the Medical History Society of Victoria (president 2007-8) and the Australian & New Zealand Society for the History of Medicine (treasurer 2003-15, honorary life member 2012).

His father, a refugee from Poland, had studied medicine at Melbourne and became a GP in Western Australia. Noel married Brenda Ruth Machin, a physiotherapist he met on the boat to the UK, and they had a son & two daughters, both medically qualified and one, Lindy, also an anaesthetist. He had many non-medical interests: sailing (he was commodore of his yacht club), golf, tennis and skiing were all pursued keenly, and he had a passion for jazz, being a self taught pianist who played in a band until just two months before his death.