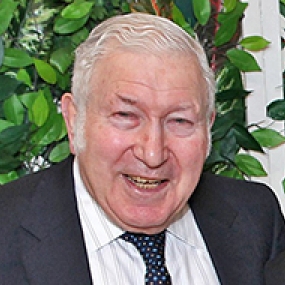 Dr Kaufman was born in Edinburgh to parents of modest means.  He won a full scholarship to George Heriot’s School where he was Dux in chemistry and studied medicine at Edinburgh University, where he excelled in clinical surgery.

Most of Dr Kaufman’s training in anaesthesia was undertaken at University College Hospital (UCH) and the Hospital for Sick Children. After completing National Service, he gained Fellowship of the Faculty of Anaesthetists (FFARCS) in 1956 and an MD in 1962. He was appointed Consultant to Hampstead General and the Royal Free Hospitals in 1962 and in 1965 began his long association with St Mark’s Hospital. In 1968 he was invited to set up the Academic Department of Anaesthesia at UCH to promote anaesthetic research and teaching. The Unit was funded partly by private donation, but largely by Dr Kaufman himself.

As a registrar, he published a paper on cholinesterase deficiency in childhood and later studied and published seminal work on patients with muscular dystrophy undergoing surgery. He established that morbidity and mortality were related to inadequate respiration and that all respiratory depressants were hazardous in these patients.  This work earned him the Registrar’s Prize of the Anaesthetic Section of the Royal Society of Medicine (RSM), and led to his MD from the University of Edinburgh. It established him as an expert in the field.

Dr Kaufman set up the ‘Primary’ and ‘Final’ FFARCS courses at UCH for trainee anaesthetists, and ran them for over 25 years.  His clinical research in a range of anaesthetic disciplines resulted in publications on phaeochromocytoma, cardiac arrhythmias during dental procedures, anaesthesia for muscular dystrophy, muscle relaxants and clinical problems peculiar to abdominal surgery.  He secured research funding for senior registrars in anaesthetics at St Marks, from which significant work emerged on pain relief following abdominal surgery, the endocrine response to surgery and the physiological response to stress.  He was awarded the Pask Medal in 1990 by the Association of Anaesthetists in recognition of his contribution to anaesthetic literature. He lectured in the UK, Australia, the USA and Hong Kong.

Dr Kaufman examined in the London MB and for the Primary FFARCS in pharmacology. He examined also for Final FFARCS, in medicine for the FDS and in physiology and critical care for the FRCS (Edinburgh).  He served on the Academic Board and Medical School Council of UCH Medical School and on the Council of the Anaesthetic Section of the RSM.  He was an Assessor on the Confidential Enquiry into Perioperative Deaths and Advisor to the Australian Medical Research Council.