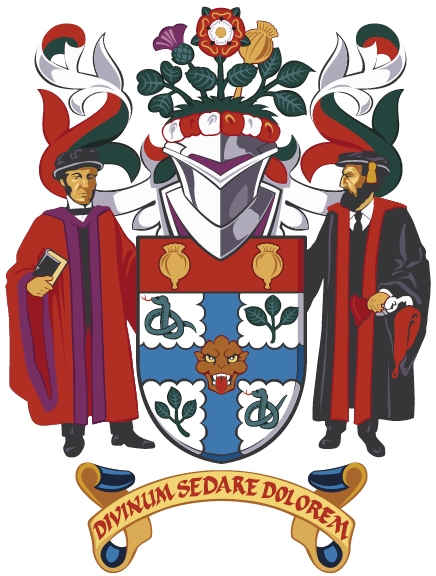 Heraldry (the art and science of personal identification) originated in the twelfth century to distinguish friend from foe in the heat of battle amongst heavily armoured knights with their visors closed. The use of heraldry for this original purpose was relatively short lived. This was because gunpowder, which was introduced into Europe in the fourteenth century, made heavy armour obsolete. Heraldry lived on, however, to distinguish armies and buildings by flags and badges, to demarcate personal property, and for ceremonial purposes.

The College of Arms was founded by Richard III in 1484. Its Officers are the Kings of Arms and Heralds who have the duty of recording and  regulating the use of arms under the direction of the Earl Marshall of England. Anyone can design and use a logo or register a trade mark, but the right to bear heraldic arms is an honour bestowed by the monarch on eminent individuals or institutions. The then College of Anaesthetists was granted this distinction in 1989 even before the College received the 'Royal' accolade by Charter on 16 March 1992.

The Arms of the Royal College of Anaesthetists

What do the different parts of the shield signify?

Every item featured on the shield has been carefully chosen. The golden morphia poppy heads or seed boxes, which come from the arms of the Association of Anaesthetists of Great Britain and Ireland, are displayed 'in chief' on the red band. They represent general anaesthesia and analgesia. The knotted serpents in the first and fourth quadrants are taken from the Surgeons’ shield, as snakes are traditionally associated with the power of healing. The cocaine leaves in the second and fourth quadrant represent local anaesthesia. The lion’s face, at the centre or 'fez' point, echoes the crouching lions representing vigilance which are a distinctive charge on the Surgeons’ arms.

The helmet depicted is that of an esquire or gentleman because the visor is closed. This reflects the status of British anaesthetists as members of the medical profession. This helmet is, however, unusual as it faces forward ('affrontée'), like that of a knight which usually has an open visor. An esquire’s helmet is normally set in profile with a closed visor, as in the arms of the Royal Society of Medicine and the Association of Anaesthetists of Great Britain and Ireland.

The crest fixed on the top of the helmet by a wreath is another distinguishing device used by knights encased in armour. It can be used on its own as a badge or identification mark. The crest of the Royal College of Anaesthetists symbolises general and local anaesthesia (the poppy head and cocaine leaves) and the geographical jurisdiction of the College (the Tudor rose of England and Wales, the thistle of Scotland, and the shamrock of Northern Ireland).

The 'mantling' or 'lambrequin' was originally a cloth cover to keep the sun off the helmet but, in heraldry, it is often used to depict symbolic colours. The mantling of the helmet of the Royal College of Anaesthetists is in red, green and white (silver). These are the principal colours of the arms of the Royal Society of Medicine.

The supporters standing on either side of the shield are granted to institutions only as a mark of special distinction. The supporters of the arms of the Royal College of Anaesthetists are the pioneer British anaesthetists John Snow (1813-1858) and Joseph Thomas Clover (1825-1882). Snow is depicted as a Doctor of Medicine of the University of London and has his early work 'On the inhalation of ether in surgical operations' in his hand. Clover holds his famous portable ether inhaler and is dressed in the robes of the Royal College of Surgeons of England. The dress of the supporters emphasises that Snow was primarily a physician and that Clover was originally a surgeon.

The motto on the scroll at the base of the shield is 'Divinum sedare dolorem', translated as 'It is divine (or praiseworthy) to alleviate pain'. The wording was chosen by the College Council with great care and reflects the primary function of the specialty of anaesthesia.

This article was written by the late Dr Thomas B. Boulton.  Dr Boulton played a key part in the negotiations with the College of Arms when the shield was designed, together with Dr P W Thompson who took over when Dr Boulton retired from College Council.

Dr Boulton acknowledged the patient co-operation and advice of John P. Brooke-Little Esq., CVO, MA, FSA, Norroy and Ulster King of Arms, during the negotiations for a grant of arms. Thanks were also expressed to Michael Birley Esq., MA, of Marlborough College, who advised on the choice of motto and its correct Latin interpretation.