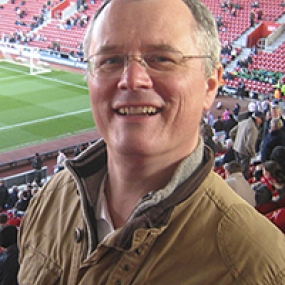 Consultant anaesthetist East Sussex Healthcare (b 1961; q St Mary’s Hospital, London 1993; BA, MBBS, FRCA), died from metastatic bowel cancer on 30 November 2012. Jeremy Davies began his academic career reading English language and literature at St Peter’s College Oxford. This was followed by a decision to pursue medicine at St Mary’s Hospital followed by a 7 year training programme in anaesthesia. In 2002 he took up a post as consultant anaesthetist in Eastbourne providing the lead role in obstetric anaesthetic services. During his all too short appointment he engrossed himself in the development of the obstetric anaesthesia service, achieving an exceptionally high standard by application of his reputable commitment and enthusiasm. His dedication, good nature and quick wit were an inspiration to all. He maintained an active interest in literature, history and Southampton football club, a reflection of his rich and full education. He faced his progressive two year illness with optimism and selflessness and used the good times to enjoy the company of family, friends and colleagues. He is survived by his wife and two sons aged 6 and 3.