The Origins of the Royal College of Anaesthetists and its Fellowship

The Origins of the Royal College of Anaesthetists and its Fellowship

Working towards independence and the Royal Charter

The granting of the ‘Royal’ accolade by Charter on 16 March 1992, as shown in the image below, was a definitive moment in the development of an independent body responsible for Educating, Training and Setting of Standards in Anaesthesia in the UK. The grant was the formal marker of the establishment of an exciting ‘new’ organisation, but it was equally the end of a process of seeking fully independent professional status for British anaesthetists. 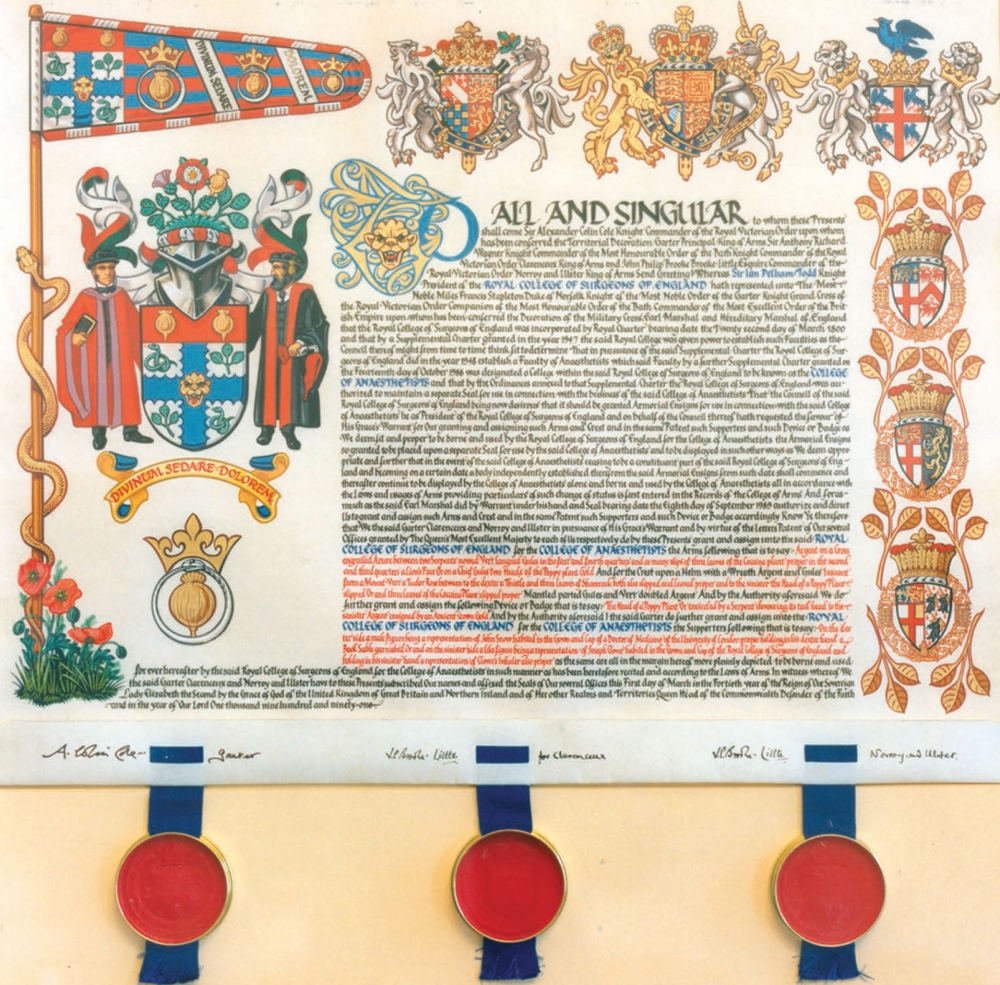 All of the medical Royal Colleges can trace their origins to the Guilds of Craftsmen established in the 12th and 13th centuries, but a more specific antecedent to this College was the Society of Anaesthetists formed in London in 1893.1 Nearly 60 years after the introduction of anaesthesia into medical practice its practitioners, led by Dr. Frederick Silk, saw the need for a specialist society to help their activities and ambitions grow. The objects of the Society, the first body of anaesthetists in the world, were:

The objects were attained by means of debates, discussions and the reading of short papers.

In 1907 15 other specialist medical societies joined together to form the Royal Society of Medicine (RSM), and the Society of Anaesthetists joined with them the following year to become its ‘Section of Anaesthetics’. Joining a larger organization had many benefits, but the RSM was, indeed still is, a scientific body of charitable status, and this precluded the Section from any other activity. However, by the 1930s there was a need for an organization to support the growing specialty, to enhance the status and training of its practitioners, and to secure better financial reward for their services. Thus, members of the Section, led by the retiring President, Dr. Henry Featherstone, founded the ‘Association of Anaesthetists of Great Britain and Ireland’ in 1932. One of the Association’s early primary objectives, driven by Dr. (later Sir) Ivan Magill, was the establishment of a postgraduate qualification.2 Discussions with the Conjoint Board of the Royal Colleges of Physicians and Surgeons in London were soon successful and the world’s first formal qualification in anaesthesia, the Diploma in Anaesthetics (DA), was introduced in 1935.

These developments were very much part of a process of recognition that safe, effective anaesthesia requires properly trained (both clinically & academically) specialists. This was perhaps not well appreciated in the Armed Services at the beginning of the Second World War, but the requirements of the conflict resulted in a major change.3 As a result there was a good number of enthusiastic, trained anaesthetists available to take advantage of the opportunities afforded by the introduction of the National Health Service (NHS) in 1948. Crucial to the further development of the specialty was the principle that all specialties were ‘equal’ within the NHS, although long and hard negotiations were needed to establish that this applied to anaesthetists,2 and other, so-called ‘minor’, specialties. A major supporter was the wartime President of the Royal College of Surgeons of England (RCSEng), Sir (later Lord) Alfred Webb-Johnson, fortuitously a friend of Dr. Archibald Marston, then President of the Association. Webb-Johnson saw that anaesthetists required both an organization and a qualification of higher academic status if they were to meet the requirements for consultant status in the NHS.

Webb-Johnson proposed an upgrade of the DA by the addition of a primary examination of basic science knowledge, and the formation of a Faculty of Anaesthetists within the RCSEng. Both proposals were accepted, but bold and rapid action was required during 1947 to have them implemented quickly enough to ensure the status of anaesthetists within the NHS. Discussions with the Conjoint Board led to the introduction of regulations for a ‘two-part’ DA (modeled very much on the surgical Fellowship examination) on 1st January 1948, with the first revised examinations being held in November.4 Discussions between the Association and the College led to a formal petition from the former for the formation of a Faculty, and this was quickly instituted, having its first meeting on 24th March 1948. Marston was appointed as the first Dean, with most of the other 20 members of the Board being current or past members of the Association Council. The Faculty had direct representation on the Conjoint Board for supervision of the DA examination (the Association’s role had only been advisory), and also to a number of other bodies (e.g. General Medical Council). Several committees were formed, notably one to review post-graduate education in the specialty, and a programme of lectures and tutorials (on both anaesthesia & the basic sciences) was soon in place.5

To learn more about the development of anaesthesia in war time, read our article The Influence of two World Wars.

All holders of the DA were eligible for membership of the Faculty and, with a postgraduate examination already in existence, the Fellowship (FFARCS) was to be awarded, by nomination, “to those achieving distinction in the specialty”.6 The Board defined detailed criteria for such nomination, and there was agreement for the appointment of 150 Fellows in the first 2 years, with another 10 each year thereafter.7 Thus at the end of December 1952 170 such awards had been made, 28 of them being to eminent practitioners from overseas, and these 170 ‘Foundation’ Fellows are the initial subjects of the College’s ‘Lives’ project. However, change was afoot, with proposals being developed during 1952 to introduce regulations for the award of the FFARCS by examination, the first sitting being held in October 1953. The DA reverted to its previous ‘one-part’ regulations, although the continued existence of a ‘qualification’ with lower academic and clinical training requirements was the source of controversy for many years thereafter. This revision of the FFARCS regulations, the first step towards examination becoming the primary qualification route, was welcome, but meant that those who had passed the ‘two-part’ DA and were in senior posts might have been disadvantaged. Thus, for a two-year period, such individuals were eligible for the FFARCS if they had been appointed as consultants in NHS hospitals approved for training by the Faculty. This resulted in the election of another 131 Fellows, these to be the subjects of the second tranche of studies in the ‘Lives’ project.

The above summary outlines how the Faculty came into being and how its Fellowship examination became an essential postgraduate qualification (clinical training in approved posts being another) for specialist anaesthetists in Britain. Faculty, clinical training and examination all evolved over the next four decades, and the details are beyond the scope of this account. However, a growing concern during those years was whether the Faculty, while a vital stage in the specialty’s development, was of the standing required for fully independent status. Leaving the RCSEng had obvious disadvantages, at least in the short term, and there was a range of views in the specialty. In 1988 the Faculty became the ‘College of Anaesthetists’ within the RCSEng in the hope that this would provide independence, but with the advantages of close association with the surgeons. This arrangement did allow the granting of a Coat of Arms, but the Privy Council could not recommend a Royal Charter unless there was complete constitutional separation.8 Thus negotiations continued, the College moved into its ‘own’ home (initially at 48/49 Russell Square which was officially opened by HM The Queen on 8th July 1993), the Royal Charter was granted and the letters ‘FRCA’ became a proud post-nominal! 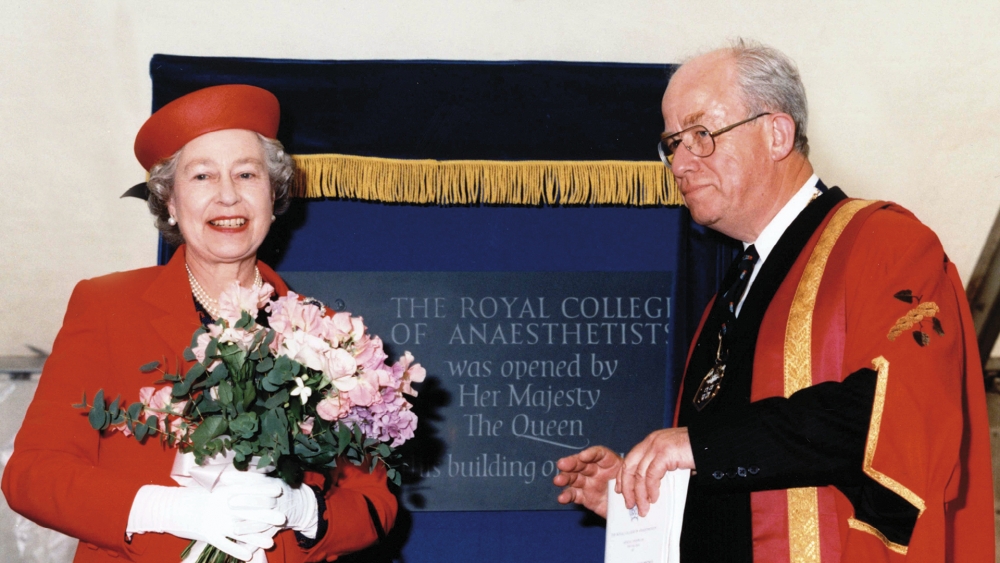 Her Majesty The Queen officially opens the first Royal College of Anaesthetists headquarters at 48/49 Russell Square on 8 July 1993. The President of the College at the time was Professor Alastair Spence, seen here with Her Majesty.