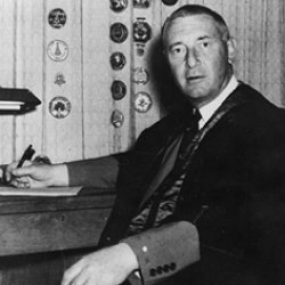 Also known as: ‘Jock’ to some

Early postgraduate appointments not known, but became Assistant Anaesthetist & Assistant Instructor at the London Hospital in 1934, eventually becoming Honorary Anaesthetist there. Having visited Ralph Waters on a tour of the USA in 1934 Gillespie resigned his London appointment in 1939 and became a resident at Wisconsin General Hospital, eventually becoming Associate Professor. From 1947 to 1953 he held a part time position working mostly on statistical surveys.

Served as American Editor of the BJA (dates needed) and contributed to a number of major works related to anaesthesia, notably his 1941 masterpiece on Endotracheal Anaesthesia, the Wisconsin study of the complications of chloroform, and a History of Anaesthesia co-authored with Thomas E Keys.

Gillespie was a very religious and highly cultured individual. Before WW1 his mother taught at the American Mission School in Jebail, Syria and met a young archaeologist, TE Lawrence (‘Lawrence of Arabia’), who guided the young Noel’s reading. After WW1 his mother met Dr Albert Schweitzer (the great theologian, organist, philosopher, physician and medical missionary) and it seems that it was she who suggested that Noel take time out of his studies at Oxford to accompany Schweitzer on his next sojourn to Africa. The experience would seem to have been a major influence, and throughout his life Gillespie was active in religious activities (including ‘Toc H’), various charities and the Boy Scouts, was a competent musician and an excellent rifle shot.

Sources and any other comments: Surprisingly, there would seem to be only one brief contemporary (anonymous, but said to be by Geoffrey Kaye) obituary (Med J Aust 1955; 2: 596). However, the Wisconsin Historial Society (www.wisconsinhistory.org) holds an extensive archive (including photographs) and there is a biography by Dr Mark Schroeder (who has kindly helped with this contribution) at the Wood Library Museum website (www.woodlibrarymuseum.org/Finding_Aid/gillespie/gillespie_m3.html).