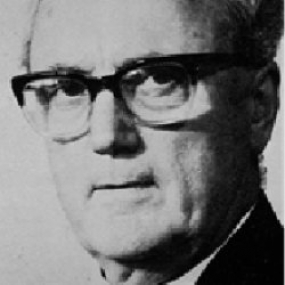 Having finished his undergraduate course, Ritchie was a house surgeon in Auckland before travelling overseas, working his passage as ship’s surgeon in both directions. In London he was often out of work, but was helped by Dr Ronald Jarman, undertook locums, and gained some experience at St George’s and Queen Charlotte’s Hospitals, and the Rotunda in Dublin. He passed the DA(RCP&S) in 1937, returning to New Zealand and settling into private general practice and anaesthetics in Dunedin from 1938 to 1949. In 1943 he became visiting neuroanaesthetist to Dunedin Hospital, and Director of Anaesthetics there in 1949. This post became full time in 1950, and he held it until January 1975. In parallel he was Lecturer/Demonstrator in Anaesthetics at the University of New Zealand from 1940, and Senior Lecturer from 1950, reorganisation in 1961 meaning that his academic post was then within the University of Otago. He undertook tours of North American and European centres in 1958 and 1968 (the latter on a Nuffield Scholarship), and was Associate Professor in the University of Otago from 1971 to 1974.

Professional interests and activities
Ritchie’s home was the venue for a meeting involving three others (Eric Anson from Auckland, Alf Salter from Wellington and Tim Taylor from Christchurch) that established the NZ Society. He was its second (1954-55) President and became a Life Member in 1969. He was a Foundation Fellow of the Australasian Faculty in 1952, served on its Board from 1956 to 1960, and received the Orton Medal in 1974. He was an investigator of deaths under anaesthesia from 1950, and invented many safety gadgets, notably the “Ritchie Whistle”, an oxygen failure warning device (see sources below). This interest led to him being a member of the Medical Committee the NZ Standards Organisation from 1966 to 1974. He was appointed OBE in 1975.

His father (Russel Ritchie) was Tutor in Anaesthetics in Dunedin from 1906, the first to hold such an appointment there. He was appointed Lecturer in Obstetrics in 1909, but continued with an interest in anaesthesia. A cousin, Dr Tom Ritchie, was a consultant anaesthetist at Shotley Bridge Hospital near Newcastle-upon-Tyne. JR Ritchie was a keen photographer, and also built his own first TV – before transmission was available in New Zealand!

Sources and any other comments: Baker AB. Ritchie of the Whistle – a New Zealand pioneer anaesthetist. In: Diz JC, Franco A, Bacon DR, Rupreht J, Alvarez J (Eds). The History of Anaesthesia: Proceedings of the Fifth International Symposium on the History Anaesthesia. International Congress Series 2002; 1242: 299-307. Baker AB. One hundred years and more of anaesthesia in Dunedin: The 1992 Ritchie Memorial Lecture. In: Jones D (Ed) Tribute-ARIES Proceedings of a meeting Commemorating Professor AB Baker at Otago University 1975-1992. Dunedin: University of Otago, 1993; 50-62 [Hon Archivist’s note: This valuable publication is not readily available in the UK, but Prof Baker has kindly donated a copy to the RCoA where anyone wishing to know more about Dunedin’s contribution to anaesthesia may consult it.] Clayton J. Obituary: John Russell Ritchie. NZ Medical Journal 1976 (June 9): 413-414