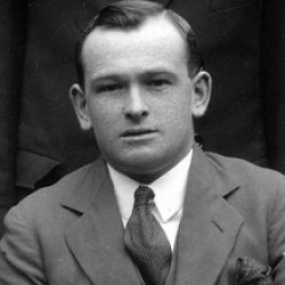 Published extensively on Avertin (tribromoethanol) as a complete anaesthetic in children, and also on cyclopropane anaesthesia. His MD thesis was on the use of rectal Avertin and in 1960 he was also a foundation recipient of the FFARCSI.

The son of a baker, John Boyd paid his own way through the Royal Belfast Academical Institution and Queen’s University Medical School by dint of hard work and business enterprise - he augmented his schoolboy pocket money by selling the well-known Ulster soda bread. Of short stature, he was always immaculately dressed, his sartorial elegance being crowned by the wearing of a large trilby hat which was often the only part of him visible above the steering wheel of his massive black Lanchester limousine. He was a dedicated Bible student whose expert opinion was regularly sought regarding the interpretation of various passages and who was at his happiest teaching Holy Writ in a small gospel hall in Crossgar, Co. Down.

Sources and any other comments:
Sources: Medical Directory, and entries in three books: Cadwell HG, The Life and Times of a Voluntary Hospital: the history of the Royal Belfast Hospital for Sick Children, 1873-1948. Belfast: Brough, Cox and Dunn; 1973 Clarke RSJ, The Royal Victoria Hospital, Belfast: a history, 1797-1997. Belfast: Blackstaff; 1997 Love H, The Royal Belfast Hospital for Sick Children – a history, 1948-1998. Belfast: Blackstaff; 1998.  A photo of Dr John Boyd is included in H Love's book.