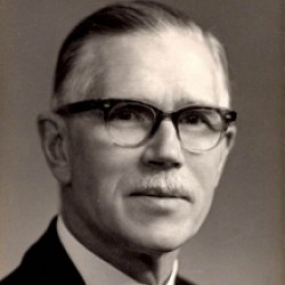 After house appointments at Manchester Royal Infirmary he became anaesthetist at the city’s Victoria Memorial Jewish Hospital, and within 12 months was also working at Park (Davyhulme) & Salford Royal Hospitals, as well as the Holt Radium Institute. Subsequent appointments included Manchester’s Royal Eye & Withington Hospitals, and the Duchess of York Hospital, Salford. In 1939 he joined the RAMC, serving in England, France & Belgium, and ultimately becoming adviser in anaesthetics to Eastern Command in India and attaining the rank of lieutentant-colonel. After the war he returned to Manchester to work at the Royal Infirmary and the Royal Eye Hospital until retirement in 1961.

He had a very academic approach to anaesthesia so was very much in demand as a teacher, and also contributed to the specialty’s organisations: president of both anaesthetic section of Manchester Medical Society & Manchester Medico-Ethical Society; member of council of both AAGBI (1946-9) & RSM Section (1948-51).

He married Eleanor Beatrice Schill (MBE DPM), a consultant psychiatrist, and they had five children. Always willing to help others, his interests outside medicine were wide. He represented Lancashire as well as his University at rugby, and had a trial for England, but ill-health cut short his playing career. He continued in the TA after WW2 (TD 1952), having also served in the Royal Artillery during WW1. His concern for the under-privileged led to long-term membership of both Manchester & Salford Playing Fields Association and Ardwick Lads & Mens Club (president of the latter).