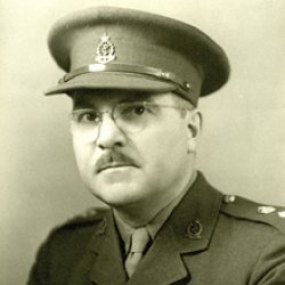 After leaving school Leech served as an infantry Lieutenant during WW1 before studying medicine in Montreal. He then returned to Regina in 1925 and in 1929 became Director of Anaesthesia at the General Hospital. He joined the services again during WW2, commanding first a Field Ambulance, then a General Hospital, and finally becoming Assistant Director Medical Services of the 2nd Canadian Division. After the war he returned to Regina, but in 1956 moved to Nanaimo, British Columbia, where he worked until his death.

Leech was primarily a clinical anaesthetist who was concerned (in the pre-relaxant era) with the provision of sound anaesthesia, favouring (and publishing defences of) procaine for spinal anaesthesia and cyclopropane for general anaesthesia. At a time when tracheal intubation was uncommon he developed a device, the “pharyngeal bulb gas airway”, really a predecessor of the laryngeal mask airway, that produced the gas tight seal required for use of a closed circuit breathing system. Calling on the administrative ability shown in his WW2 service, he also worked hard, to ensure that standards of anaesthesia throughout Saskatchewan were as high as in the major centres. Leech was the first anaesthetist in Saskatchewan to become a certificant (1943) of the RCPC, received both the OBE and the Legion d’Honneur for his war service, and was President of the Canadian Society for 1948-9.