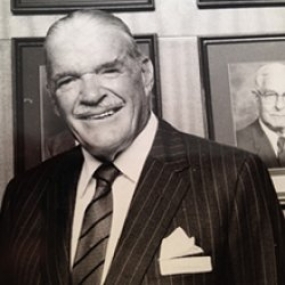 Also known as: ‘Handsome Arnold’ to his Medical School classmates.

After qualifying Robertson returned to Brisbane and took up General Practice. Finding that he liked, and was good at, anaesthesia it eventually became his full time activity. His appointment in 1938 as visiting anaesthetist to the Mater Hospital was the foundation of the specialty in Queensland. In 1939 he was the second Queenslander to enlist as an officer and he commanded a field ambulance in Europe, North Africa (seven months at Tobruk) and New Guinea. Mentioned in dispatches on several occasions, he was appointed OBE in 1944 and finished the war as a Lieutenant-Colonel. After recovering from tuberculosis, he returned to private practice as an anaesthetist in 1946, and joined the staff of the Royal Brisbane Hospital.

In 1952 he left on a visit to Britain to broaden his knowledge and experience, and stayed for nearly 20 years! He is thought to have worked from 95 Harley Street, London initially, but soon became a consultant in Newmarket where later he was the (part-time) Medical Superintendant, notably providing much administrative support for the first liver transplant performed there (the 10th in the ‘Cambridge’ series although there is no evidence that he worked in Cambridge as is noted in some accounts). He retired early and returned to Brisbane in 1970 (“To catch a few snappers before I fall off the perch”), but the death of the senior specialist at the Repatriation General Hospital resulted in a return to clinical practice and leadership of the Department. This flourished as a training centre, but the effects of an accident in the late 1970s forced his final retirement.

In his six post-WW2 years in Brisbane Robertson made major contributions to the organisations of the specialty. He became the Queensland representative on the ASA Executive in 1946, and was President for 1951-2. In 1947 he was elected to the Queensland Council of the BMA, became its secretary in 1948, and was vice-president of the Anaesthetic section of the Australian Medical Congress in 1952. He was a foundation Fellow of the FARACS in 1954.

His father was a prominent ENT surgeon in Brisbane. His Presidential address, available on the ASA website, provides a wide-ranging insight into Australian anaesthesia in the post-WW2 period.

Sources and any other comments: Information was obtained from the Armidale School, the Medical Alumni Association of Sydney University, the ANZCA, the Australian Society, Drs Brian Stead (Newmarket) & Martin Herrick (Cambridge), and Julie Polities (grand-daughter) who kindly provided the photograph.