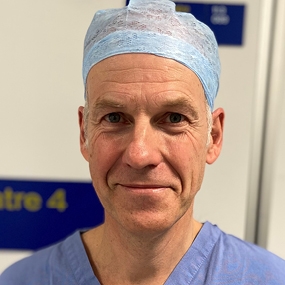 World leaders have been meeting in Glasgow this week for COP26. The decisions they are making will determine how governments around the world respond to the climate emergency. Ultimately the aim of these responses will be to change behaviour and the choices everybody makes, in order to reduce future climate impact. Some of these changes will be difficult and expensive, others will be easy and, in retrospect, obvious. Making easy, high impact changes now will maximise their effect.

As an anaesthetist I have become increasingly aware of the impact some anaesthetic clinical practice is having on climate change. In particular that some of the gases and vapours used, are potent greenhouse gases. Perhaps this shouldn’t have been a surprise given that the vapours are volatile halogenated hydrocarbons, similar to the chlorofluorocarbon compounds (CFCs) phased out in the 1990s when their role in the depletion of the ozone layer was discovered. Like CFCs volatile anaesthetics are potent greenhouse gases, much more potent than carbon dioxide. And venerable old nitrous oxide, in use since the dawn of anaesthesia, is one of the worst.

We all know how difficult it is to effect change in hospitals, incremental developments in anaesthesia have happened over the years as new drugs and techniques became available enabling us to improve the care for our patients. This change is different. This time the motivation for change is to reduce harm to our climate and the planet.

To understand just how significant this change can be, in my hospital the Norfolk and Norwich we contrasted the choices we make as anaesthetists with other impacts we make in our daily lives.

The impact of our non-clinical lives on the environment, can be significant:

Driving: The European Environment Agency estimates that a Golf sized petrol car has a carbon cost of 392g of CO2 equivalent per mile, so a typical anaesthetist driving eight miles each way to work will produce the equivalent of 6.2kg of CO2 a day.

Heating: The UK government estimates heating the typical UK home produces 2.34 tonnes of CO2 a year, about 6.4kg of CO2 a day.

Eating: The typical UK diet has a carbon cost of approximately 6.8kg a day. If you eat a lot of beef that might be as high as 10kg a day. If no beef, then about 5kg a day. A vegan diet isn’t free, it produces about 4kg of CO2 a day.

Flying: If you take one return transatlantic flight a year and spread the carbon cost over the year that equates to about 10kg of CO2 a day

But how does this compare to the impact of our choice of anaesthetic?

Using  the calculator developed by Dr Tom Pierce former environmental advisor to the President at the Royal College of Anaesthetists we learn that using one hour of two litres a minute fresh gas flow with an oxygen concentration of 40 per cent has significantly different impacts depending on the gas chosen:

This is before we add nitrous oxide into the mix. Where one hour of three litres a minute of fresh gas flow with one litre O2 and two litres N20 will increase the carbon cost by the equivalent of 67kg an hour.

And what about propofol? It has the lowest carbon footprint of the commonly used anaesthetics available, perhaps best illustrated by the fact that half of its carbon footprint is from the electricity used to manufacture the syringes. The carbon cost of using propofol is the equivalent of just 1.01 kg of CO2 per hour.

The typical anaesthetist will get up to a warm house, shower, drive to work, give anaesthetics for 8-10 hours, drive home again, have dinner and go to bed. The carbon cost of the non-clinical bits will be about 18kg a day. If at work this anaesthetist uses total intravenous anaesthesia (TIVA)the carbon cost is still about 18kg a day. If on the other hand it’s isoflurane in nitrous that adds up to the equivalent of 591kg of CO2 a day. And if desflurane in nitrous we are talking the staggering equivalent of 1.2tonnes a day.

Swapping gases for more environmentally friendly ones or choosing TIVA instead, does not compromise patient care, but not doing so does compromise our environment.

So, when you read about what may be a confused and messy outcome to the COP26 conference it'll be tempting to think there's nothing that can be done,  it’s too big a problem. Looking at these results we all must think again.