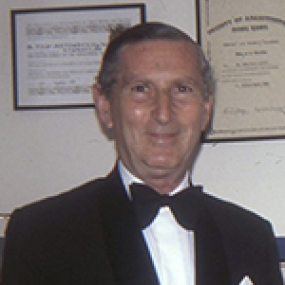 Zoltan Lett was born in Budapest on 24th November 1916 when the Great War was raging.  His studies in medicine in Prague were interrupted when Czechoslovakia was invaded during the 2nd World War – he had to complete his course of studies in Oxford, U.K., finishing his internship at the University College Hospital, London.  Zoltan enlisted and served in North Africa and in Burma for which he was awarded the Burma Star.

After the war, he trained in anaesthetics and obtained his Diploma in Anaesthetics (DA) and then gained Fellowship of the Faculty of Anaesthetists of the Royal College of Surgeons (FFARCS).  A chance meeting in 1954 with Dr. K.C. Yeoh, then Director of the Medical & Health Services of the Hong Kong Government who was on leave in the U.K., led to his recruitment to join the public health service in Hong Kong as the first Consultant Anaesthetist in the public healthcare sector, and also as a part-time lecturer in anaesthetics at the Faculty of Medicine of the University of Hong Kong.  Zoltan continued his association with the University and was Reader in Anaesthetics when he retired from the University in 1983.

Lefty, as Zoltan was known to his friends, supported Dr. Horacio Ozorio (who designed the eponymous endotracheal tube connector) in the founding of the Society of Anaesthetists of Hong Kong (SAHK) to promote anaesthesia as a specialty.  He was Chairman and then President of the SAHK for many years.  Being a key person in anaesthetics in the University, the public sector, and the SAHK, Lefty was in a good position to promote the specialty and develop good clinical practice amongst colleagues.  His many links with the international anaesthetic community were legendary. His perseverance in developing training in anaesthesia and access to specialist Fellowship qualifications from the U.K. (FARCS) and Australasia (Faculty of Anaesthetists of the Royal Australasian College of Surgeons, FARACS) for Hong Kong anaesthetists helped to fulfil the needs of Hong Kong, and in particular the public hospital expansion programme from the 1960s onwards. His dedication and contribution to anaesthetics, especially in the public sector, was immense and lasted well into his eighties.

Lefty also founded the Hong Kong Society of Critical Care Medicine (HKSCCM) in 1984 and was its inaugural Chairman. When the Hong Kong College of Anaesthesiologists (HKCA) was founded in 1989, Lefty was a promoter and founding Fellow.  Lefty was closely associated with both the SAHK and HKCA even after his complete retirement from clinical practice in 1996.  He is an Honorary Member of SAHK and an Honorary Fellow of the HKCA.  The SAHK celebrated its 60th anniversary and the HKCA its 25th anniversary just as Dr. Lett passed away.

Lefty's contribution to anaesthesia and the profession was recognized not only locally, but also internationally. He received an emeritus Professorship from the University of the Philippines for help with the World Health Organization Diploma in Anaesthetics training programme in Manila; an Honorary Life Membership from the Philippine Society of Anesthesiology; the Pask Certificate of Honour from the Association of Anaesthetists of Great Britain and Ireland (1978) for services to anaesthesia in Hong Kong; and an Honorary Fellowship from the British Medical Association (1979). He was also a Fellow of medical Colleges around the world, including the Australia and New Zealand College of Anaesthetists and the International College of Surgeons.

Dr. Zoltan Lett devoted practically his whole professional life to Hong Kong and has been labelled as the “Father of Anaesthesia” in Hong Kong by many for his contribution to the development of anaesthesia as a specialty in Hong Kong.  Lefty remained clinically active until his eighties and continued to take part in scientific meetings in all parts of the world until a stroke confined him to living at home in Bexhill-on-Sea in the U.K.  He is fondly remembered as a kind, humble, and approachable colleague, mentor and friend.  He touched many people's hearts and lives, and his kindness, generosity and dedication will live on.

Lefty passed away peacefully on 15th November 2014 in his nursing home, just nine days short of his 98th birthday, with Angela his only daughter by his side.  He is also survived by two grandchildren and a great grandchild.

We give thanks for the life of Lefty and may he rest in peace.