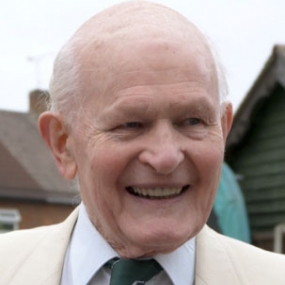 Derek Hubert Patrick Cope was born in Ewell Lodge on 1st June 1922, the first son of Dr Joseph and Kathleen Cope, and eldest brother of Michael and Paul. He was educated at Epsom College where he excelled in sciences in the classroom and, on the rugby playing fields of the College.  On leaving Epsom in 1940, he was awarded the Freer Lucas entrance scholarship to the Middlesex Hospital, where he read Medicine as an undergraduate. Upon qualifying as a medical graduate (MRCS, LRCP, MBBS) in January 1945, Derek completed his first appointment as House Surgeon at Selly Oak Hospital, Birmingham.  From September 1945 to April 1948 he worked as General Duty Orderly in the Royal Army Medical Corps, a specialist corps in the British Army which provides medical services to all British Army personnel and their families in war and in peace. This was when he discovered his interest in, and aptitude for anaesthetics.

He was released from active military duty in May 1948 and began his training in earnest, obtaining a position as junior anaesthetist at the Middlesex Hospital. In 1951 he was appointed Senior Registrar and elected Fellow of the Faculty of Anaesthetists of the Royal College of Surgeons.  He was appointed to his first substantive post as Consultant Anaesthetist in the Thoracic Unit at Grove Park Hospital in 1953, and then took up a senior post at the Middlesex Hospital the following year. Derek’s special interests were in anaesthetic procedures relating to general and dental surgery, as well as to the maternity unit.

As Consultant Anaesthetist, Dr Derek Cope had a distinguished career.  He was affiliated with many learned societies and associations, as a Fellow of the Royal Society of Medicine, and Member of the Association of Anaesthetists and British Medical Association.  He published on a wide range of themes relating to his discipline, but was particularly interested in addressing the challenging problems of pain in childbirth.  Derek was firmly of the opinion that an anaesthetic drug of sufficiently high molecular weight might not pass through the placental barrier, and would prove to be an ideal drug for maternal anaesthesia.  Another of his major interests was the treatment of cerebral hypoxia – especially following severe dehydration. Notably, his seminal contributions to the field were published in the British Medical Journal in March 1956.  He continued to practice in the private sector well beyond retirement, in latter years providing anaesthetic services to local dental practices in Marylebone.

Derek Cope married Constance Radford in 1945 in Duffield Parish Church. They set up their home in Marylebone, London soon after, where they lived for the rest of their lives. Away from his professional life, Derek and Constance both shared a great love of Derbyshire and would regularly spend holidays at their cottage in Ireton Wood.  Derek, together with his wife, also devoted much of his spare time in London contributing to the extensive portfolio of activities of St Marylebone Parish Church, as Church Warden and then as Treasurer.

Courageous, stoic, compassionate, gracious and kind, often outspoken but always thinking of others before himself, and above all one of life's gentlemen - Derek fought his final illness with great bravery, dignity, and without complaint over a period of 12 months, facing each new challenge (and operation) with cheerful determination, thanks in part to the constant and devoted support of his family, his many close friends and his strong Christian faith.  He died in the London Clinic on 16th June 2015. Derek is survived by nephews and a niece of his late brothers Michael and Paul.