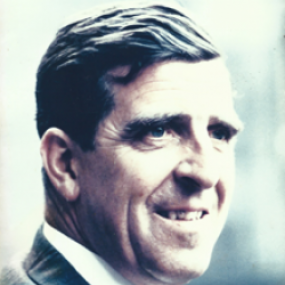 After qualifying JDR was house physician and surgeon at Edinburgh’s Royal Hospital for Sick Children before serving with the RAMC as a specialist anaesthetist in West Africa, the Middle East and Europe, ending the war as a Major. Demobilised, he was sequentially (1946-52) resident anaesthetist, medical registrar and senior registrar in anaesthetics in the Royal Infirmary of Edinburgh, before obtaining an MRC research fellowship to work in the University physiology department (1952-4). Appointed a consultant in the Royal in 1955, he became director of the department in succession to Dr John Gillies in 1960, was awarded a personal Chair in 1968, and retired in 1982 as Professor Emeritus.

His early physiological research was on CVS effects of anaesthetics, more specifically the action on baroreceptor function; subsequently he was involved with the major MRC report on the then new agent, halothane. Clinically, he was associated with the pioneer vascular and renal transplant surgeon, Sir Michael Woodruff, and anaesthesia for these procedures became a major interest. At the time that he became head of department, anaesthetists were increasingly involved in managing patients receiving artificial ventilation on general wards, but managing two (or more) patients in different parts of the hospital was stretching resources. Discovering that the small ward for students was empty, JDR ‘annexed’ it, ultimately to create an ICU administered by anaesthetists, an extension in their responsibilities that he guarded zealously. However, his later interest in studying the so-called basal anaesthetic, gamma-OH, puzzles his former trainees still!

Possibly his greatest contribution was to education and training. He set up in-service courses and through much diplomacy arranged that most of the registrar posts in Edinburgh were included in a rotation of three month blocks to ensure comprehensive exposure to all sub-specialty practice. The first-time pass rates of Edinburgh trainees proved the worth of these measures, and he spread the word in lecture tours to many parts of the World. Such activities led inevitably to membership of the Board of Faculty (1961-82) and service as a Fellowship examiner (1963-82). He was Vice-Dean of the Faculty (1969-71) and would almost certainly have been elected Dean if ill-health had not intervened. Many honours came his way, notably FRCSEd ad eundam (1964), Scottish Society presidency (1964-5) & Gillies Lecture (1981), Faculty of Anaesthetists Hewitt Lecture (1969) & Gold Medal (1981), and AAGBI Pask Award (1971). In 1989 the Edinburgh & East of Scotland Society established an annual lecture in his memory.

War service included landing in Normandy on D-Day plus 10 (in the same Casualty Clearing Station team as his future wife, an RAMC nurse) and entering Belsen concentration camp shortly after its liberation, experiences with a profound effect. He married Evelyn Patricia (Pat) McNaughton in 1945, and they had five sons: Peter (engineer), Iain (prof of architecture), Graeme (particle physicist), Roy (prof of addiction medicine) and Neil (lawyer). They were generous hosts, the annual departmental cocktail party being a tour de force, and he was a formidable competitor on the golf course.