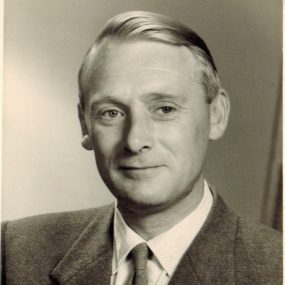 He undertook accelerated wartime posts as house physician, senior house surgeon, and casualty officer at the North Riding Infirmary (NRI), Middlesbrough. In 1943 he joined the RAMC, serving first at home and then in the Far East. After a specialist anaesthetic course in Bareilly, India, he was posted to the 5th Indian Mobile Surgical Unit providing surgical capability close to the front during XIVth Army’s recapture of Burma. At the end of the war he worked in Surabaya, Java, dealing with military and civilian casualties of the insurgency. Demobilised in 1947, he undertook further anaesthetic training at the Royal Infirmary of Edinburgh (RIE), before returning to Middlesbrough as resident anaesthetist in the NRI in 1948 and a short period in GP. The following year he became full time consultant to the Tees-side group of hospitals, a post he held until his untimely death in 1959.

Unusually for the time, his interest in anaesthetics started when he was a medical student and, as early as 1943, a testimonial described him as “an excellent anaesthetist”. During both his medical training and army service he took photographs (held by the author) depicting anaesthetic practice of the time in the RIE and Burma. His early death cut short his career, but he had already become honorary secretary to the Medical Committee of the hospitals where he worked.

His father and twin brothers were dentists in Middlesbrough. His wife, Margaret Wallace,  a student nurse in the RIE when they met, later served in the RN nursing service in Ceylon. They married in 1946 and had three daughters, one medically qualified. He was a keen sailor, building his own Enterprise dinghy and instructing others on the River Clyde. Also fond of the North Yorkshire countryside, he kept a cottage in Rosedale.