From 2018, the categories of Fellowship by Election and Honorary Fellowship have been combined into a single category; the Honorary Fellowship. The award of our Fellowship is considered for practitioners across the world who have made sustained and significant contributions to the practice of anaesthesia or relevant science, critical care medicine or pain medicine. This activity has to be at an internationally active level and normally sustained for at least ten years. Honorary Fellowships may be awarded to non-medically qualified practitioners such as scientists with a similar level of achievement and to members of the Royal Family or others who have furthered the work of the College in a sustained way.

Evidence through the Nominations Proposal Form should document this activity and the outcome of such work. Whilst there are no limits to the number of awards at this level it is unusual to award more than two or three a year. 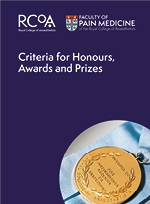 Criteria for Honours, Awards and Prizes 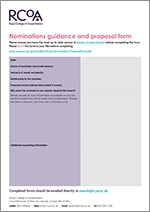